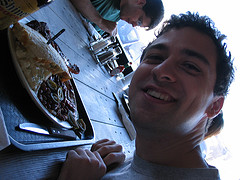 Gossip columnist Ryan Tate of Gawker.com fame fancies himself a comedic writer. In his gossip roundup dated Friday July 11th, he wrote a few word about Angelina Jolie’s pregnancy and her French doctors.

“Angelina Jolie wants to give birth, already, and leave the hospital like a tough American patriot. But her lazy, arrogant French doctors will make her wait in agony for three more days so they can celebrate cutting off rich people’s heads like communists and probably also so they can fornicate with their unbathed mistresses, get drunk and fantasize about terrorism. See what happens under socialized medicine? Celebrity divas are grossly inconvenienced! Awesome, right?”

This piece proves once again that when it comes to the French, anything goe. Once again, we have proof the Long Tail of Anti-French attitudes will last for a long time to come.

Note: In statistics, the long tail is a feature of the new distribution of online markets and human behaviour. Prominently featured in articles about Web 2.0, the concept might just as well apply to continued Anti-French attitudes.