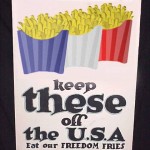 “It’s hard to remember sometimes that France and the United States actually are each other’s oldest foreign friends.

French assistance was critical to the success of the American Revolution against Great Britain. In fact, if not for French help, we’d probably all be speaking English right now. We repaid the favor – most notably during the two world wars, when we twice helped the French drive out invading Germans.

Yet despite being there for each other when it mattered, Franco-American relations recently have gotten nastier than reheated Spaghetti-Os with franks. It’s to the point that expressing disdain for France and French-ness has become an important staple of contemporary American politics.”

Read the rest of the article at Atlanta.CreativeLoafing.com
With kind permission by the author, Andisheh Nouraee

6 Replies to “Is the pissiness between the U.S. and France over?”