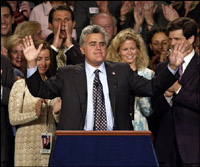 “We have American athletes in uniforms made in China, wearing French berets. I don’t know if we’re supposed to compete, ask for a loan or surrender.” – Jay Leno, July 16, 2012

“France has a new president. He is Socialist François Hollande. He defeated Conservative French President Sarkozy in a presidential run-off yesterday. Of course, Nicolas Sarkozy handed over power in the traditional French manner. He surrendered.” – Jay Leno, May 7, 2012

“Tomorrow’s Cinco de Mayo. Cinco de Mayo, of course, celebrates the victory of the Mexican army over the French. You know, if you have to use defeating the French military as a reason to spend the day drinking, you’re probably an alcoholic already.” –Jay Leno, May 4, 2012

“Why don’t they allow professional wrestling at the Olympics? They allow pro basketball players and hockey players. Olympic pro wrestling would be awesome. The team from Mexico could wear those Mr. X masks. The French wrestler could hit his opponent with a baguette. Or perhaps just surrender.” –Craig Ferguson, August 2, 2012