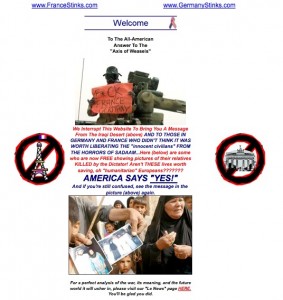 Do you remember FranceStinks.com and GermanyStinks.com? If you don’t, it’s no big deal, but back in 2003 this website was the darling of the right wing media (1) as widespread French Bashing was being unleashed on the American Public.

Featuring crass and vulgar materials, the website was the brainchild of one Dan Fendel who went under the alias ‘Yankee Doodle’. Fendel was at the time a California-based technical coordinator for many popular television series, from Family Matters to the odd episode of Seinfeld, Friends or Frasier.

When Fendel’s website was hacked in March of 2003, it was featured once again by FoxNews. Asked about the controversial content, Fendel replied:

“The sites were set up as a place for Americans to get together and discuss their feelings,” he said. “But we have gotten wonderful moving letters from all over the world, some saying ‘We’re with you,’ ‘We love you’ … They’ll make you cry.”

I wrote to Dan in March and November of 2003, asking him a few questions about his site and his ideas. Dan wrote back both times, lecturing me about the French involvement in the building of the Osirak reactor, the selling weapons to Saddam Hussein and French oppression in Côte d’Ivoire. His then went on to make a prediction about the Iraq War:

Let’s face it–the war is about to happen, it will be over briefly, and the hundreds of thousands of Iraqi refugees in this country and all over the Middle East can’t wait to see their families free of the terror of Saddam. They’ll go back, we’ll help them rebuild and then leave, and Iraq will become one of the richest, most democratic nations in the region.

His closing comment was directed at France and Miquelon.org:

Your country, which I once felt great fondness for, is becoming as isolated, insignificant, and soon forgotten as Miquelon itself. At least you picked the name right.

By August of 2004 (2), the website had been shut down and abandoned, the domain bought and sold by a great number of domain squatters. The rest as they say, is History.

79 Replies to “The Case of FranceStinks.com”