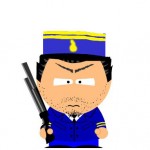 The world of cartoons is a powerful way to get out any message you could never achieve with traditional actors or more conventional means. Much like Aesop’s fables, the use of animated characters often serves as a vehicle for political and social satire that avoids serious scrutiny. After all, it’s just a cartoon right?

The Simpsons, Family Guy, King of the Hill and South Park have all achieved success through poking fun at our collective hypocrisies or our contradictions. Unfortunately, when empowered with such a potent vehicle, the creative teams behind these cartoons sometimes let their own prejudices show through.

The Simpsons famously entered the fray of Anti-French prejudice with several barbs, most notably the “Cheese eating surrender monkey” epithet spoken by Groundskeeper Willie in an episode aired on April 30, 1995. In another episode, the character Lenny is also used as a vehicle for Anti-French stereotypes: “I’m shaking like a French soldier!”. Anti-French prejudice from the Simpsons is also evident in licensed games such as “Medal of Homer” (See note 1).

Matt Groening disputed his association with that now famous Anti-French slur: “That was not the original context. It was all about Willie yelling at students in a French class. People took that expression out of context (…) Besides I adore France, to be associated with this was insulting” (See note 2). Given the Simpsons long record of Anti-French attitudes, Matt Groening’s comments can only be considered as pure hypocrisy. But enough with this antiquated series that overstayed its welcome 6 years ago. 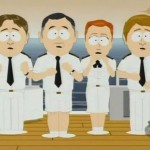 Last Wednesday, South Park aired an episode ripped from the headlines that deals with Somali pirates. At one point a French crew surrenders to children wielding toys. In another scene, another characters exclaims: “they were French so of course they surrendered immediately”.

South Park’s late foray into the world of French Bashing is not only regrettable, it proves once more that anti-French prejudice is so entwined in American pop-culture that it will take monumental efforts on our behalf to undo the harm done by years of laissez-faire.

In the meanwhile, little can be done with our limited means. We can however let the creators of South Park know how we feel with it comes to mocking the most tragic event of our recent history or we can also share our opinions with the myriad of bloggers, writers, columnists out there who are applauding this new Anti-French jab like circus seals.