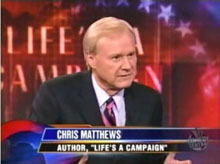 “In the years since our decision to go to war in Iraq, resisted by our old allies, there’s been a chauvinistic stupidity about the value of other countries.You know, the French fries, the freedom fries, the attacks on old Europe.”

Chris Matthew’s address to the class of 2008, Washington University in St. Louis. Selected passages : “The most popular movie ever made about American politics, “Mr. Smith Goes to Washington,” which came out just as World War II was starting is the story not of a bigshot, but of a young guy who takes on the bigshots, who spots the rot at the top in our government, and risks all to save the country from it.

The young hero played by Jimmy Stewart is named Jefferson Smith, a direct heir to Thomas Jefferson who said, “A little revolution now and then was a good thing.

It’s no wonder that the powers in Washington hated that movie, that Joe Kennedy, the movie mogul and the father of a president, and not the greatest Democrat in the world — I’m talking about Joe — tried to get Columbia Pictures to pull it. It’s not surprising either, that the American people, suspicious of power in high place, loved it. Kennedy said it would harm our image in those early days of World War II. On the contrary. When the Nazis declared a ban on all American movies in occupied France, theaters chose “Mr. Smith” as the last movie to be shown. Those French played it again and again, cheering this lonely young man’s struggle against tyranny. (…)

One, because there’s a push out there to define Americanism these days in a narrow, nationalistic sense.

In the years since our decision to go to war in Iraq, resisted by our old allies, there’s been a chauvinistic stupidity about the value of other countries. You know, the French fries, the freedom fries, the attacks on old Europe. If we were more confident of our own identity, if we “got it” about our own country, not that we’re better than them, but that we have some really good stuff going for us — I think then we wouldn’t be constantly knocking other countries. (…) ”