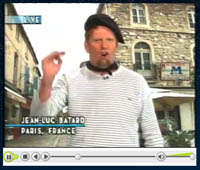 First it was an improvised joke last week about a French policeman guarding the Mona Lisa in Paris muttering, “Just in case, I surrender”.

Then tonight it was a sketch about a French Smoking Ban with more jokes about the French Surrendering at which point you reminded people about the Franco-Prussian War, World War I and World War II.

We would like to point out to you, for historical accuracy, that the French did not “surrender” during World War I. But history aside, the old surrender jokes are getting a tiresome and offensive. During World War II, the French lost as many lives as the Americans, during World War I, 1,3 million French Soldiers died on the battlefields of France.

You have been one of the most original, and often quite astute, late night comedians in a long while, but regretfully you have decided to pick up the French Bashing torch. So much for the Auld Alliance.

Tell Craig Ferguson what you think today!
Be polite and informative.