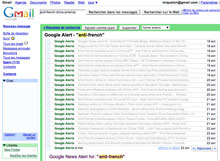 Comments about “freedom fries” have been showing up a lot in the background chatter, they stem from news stories about Walter B. Jones Jr, a Republican Representative who famously brought the new name to the White House Cafeteria.

Jones has since expressed regret for the “freedom fries” incident, and has become a vocal anti-war Republican. Jones was recently challenged in North Carolina’s 3rd congressional district by a pro-war Republican named Joe McLaughlin. Jones won the primary by 20 points, and despite his repentance, is constantly associated with that epithet. Freedom fries have become a politically derogatory term.

Another frequent item picked up in the background chatter, are the keywords “Anti-French” as per protests in China. This has given rise to hundreds of news items, press articles and commentary, some evoking parallels with the Anti-French frenzy in America from 2003 onwards.