During his surrender concession speech, Mitt Romney warned his audience that America, if not careful, could become another “France”, a Romney euphemism for failure.

I am convinced that unless America changes course, we will become the France of the 21st century—still a great nation, but no longer the leader of the world

Let’s turn the clock back one year. 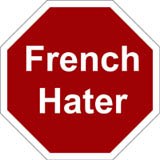 In February of 2007, the Boston Globe leaked an internal Romney memo detailing his strategy for discrediting Hillary Clinton. The PowerPoint file was the object of ridicule by the press and pundits, most notably the part where it was revealed Romney’s team would try to make Hillary sound “French”.

Taking a page out of the “Kerry looks French” strategy of Bush’04, Mitt Romney was banking on a repeat performance of Anti-French electioneering.

Mitt Romney’s Anti-French obsession can be traced back to his missionary work in France.

19 Replies to “Mitt Romney takes a parting swipe at France”