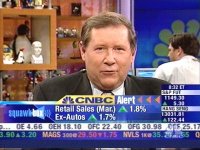 CNBC, whose audience is mainly composed of wealthy decision-makers, investors, bankers and executives in America, has a worldwide reach through satellite transmission. Unfortunately, Francophobia seems to be widespread and endemic on this channel. The two worst offenders being Marc Haines (Squawk on the Street ) and Joe Kernan (Squawk Box).

Specialists suspect CNBC even goes as far as not reporting or censoring news about French companies. It is know for instance that CNBC commonly misidentifies French companies. For example CNBC once aired a report about CapGemini, which they claimed was a British company, when it fact it French.

Our readers may remember that General Electric owns CNBC. Given the high level of Francophobia that has never been curtailed by neither CNBC nor GE, it might be important to look into GEfs activities in France. Currently, GE employs 10,000 persons in France and has sales of 4 billion euros per year with 6 production facilities. GE has six areas of activity in France: Infrastructure, Healthcare, Commercial Finance, Industrial, Money and NBC Universal. A boycott — or even the threat of a boycott — could really hit them where it hurts — in the pocketbook!  And it might encourage the GE management to muzzle those Francophobes once and for all.

An anchor’s opinions about France should remain their personal business. As journalists and professionals, they should be mandated to report the news fairly and objectively and not editorialize nor distort their reporting with their own brand of Francophobia. This is even truer since France seems to be the only country singled out for ridicule!

We know for fact that TV comedians like Jay Leno like to ridicule France and the French –although Jay likes French cars — but we do not really think that the damage they do is nearly as significant as the damage to France caused by certain vicious anchors and reporters from the CBNC network.